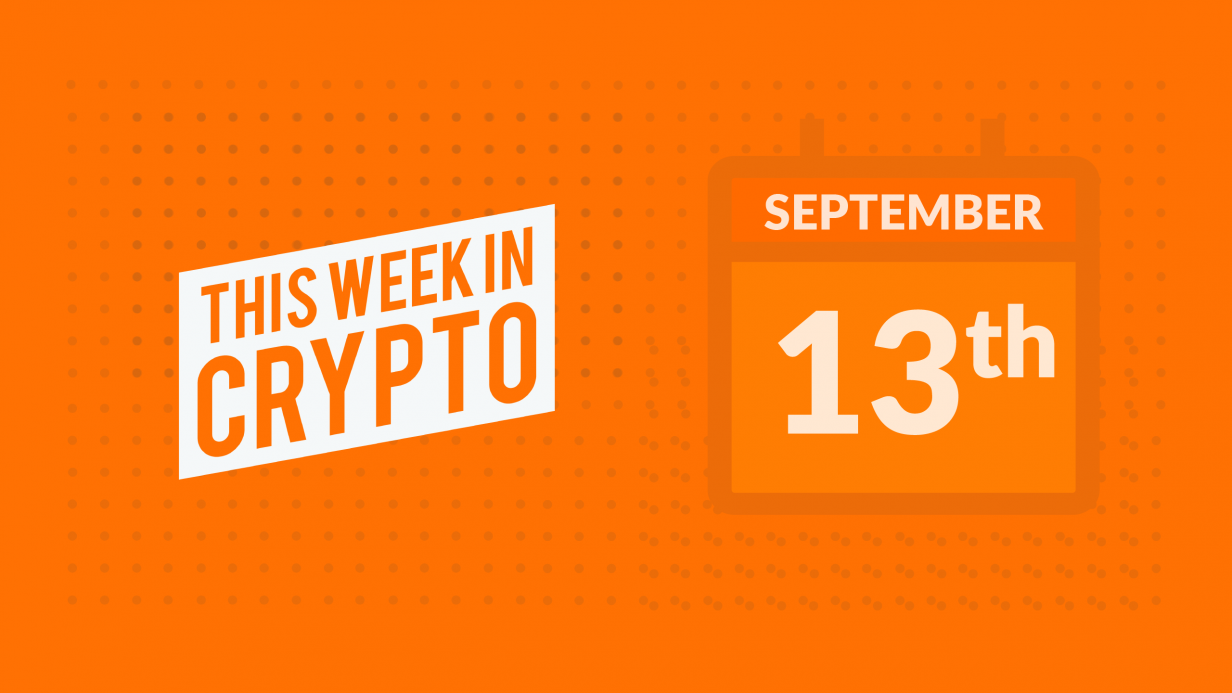 This is your weekly roundup for the week ending September 13, 2019. The Libra Association stays firm on launching, despite rejection in the EU, KyberSwap introduces a fiat on-ramp, and Binance US is preparing to launch next week.

Earlier this week, Facebook announced that it added the Singapore Dollar to it’s Libra basket of fiat currencies. According to bloomberg, Facebook wrote in response to concerns from Virginia Democratic Senator Mark Warner, telling U.S. senators that the initial basket of currencies that will back its Libra cryptocurrency will likely include the U.S. dollar, the euro, the yen, the British pound and the Singapore dollar.

Facebook also left open the possibility that the Libra Association might launch Libra outside the U.S. even if regulators inside the U.S. still have concerns.

Then, FINMA confirmed that they received a request from the Libra Association for an assessment of its Libra project under Swiss supervisory law. FINMA released new stablecoin guidelines, noting an increase in stable coin’ projects since 2018.

FINMA will treat stable coins just like existing blockchain-based tokens, with a focus on the economic function and purpose of a token. FINMA stated “The requirements under supervisory law may differ depending on which assets (e.g. currencies, commodities, real estate or securities) the ‘stable coin’ is backed by and the legal rights of its holders.” The Libra Association is seeking a swiss payments license, as they asked FINMA for an assessment of how they would classify the planned Libra project and issuance of a ‘stable coin’ under Swiss supervisory law.

According to Reuters, the Libra Association stated “We are engaging in constructive dialogue with FINMA and we see a feasible pathway for an open-source blockchain network to become a regulated, low-friction, high-security payment system.”

Then at the Organisation for Economic Co-operation and Development (OECD) conference on cryptocurrencies, finance minister Bruno Le Maire strongly opposed Facebook’s Libra cryptocurrency stating “I want to be absolutely clear: In these conditions, we cannot authorise the development of Libra on European soil.” Le Maire reportedly expressed concerns that Libra may “substitute itself as a national currency” and potentially cause financial disruption.

Despite regulatory scrutiny, the Libra Association is staying firm on the launch of the Libra cryptocurrency. In an interview with French publication Les Echos, Libra managing director and COO Bertrand Perez addressed the concerns of regulators about Libra posing a threat to financial stability, stating that “It is their monetary policies that will influence the Libra through the basket and not the other way around.”

He added that the reserve will be invested in the basket currencies and in very short-term government debt. He also said that the reserve would amount to no more than $200 billion. Perez readdressed that the U.S. dollar should have at least half the weight of the basket and that “If there is a catastrophe on a currency or a crisis between now and the Libra [launch], we could remove it from the basket, but this decision should be put to the vote and taken by a two-thirds majority of the members of the association.” Perez ended with saying that the Libra Association is firmly maintaining their launch schedule, between Q3 and Q4 2020.

No Crypto-Crypto Tax in France

Mastercard has partnered with enterprise blockchain software provider R3 to pilot a new blockchain-powered cross-border payments solution. The project aims at connecting faster payments schemes with banks backed by Mastercard’s clearing and settlement network. According to R3, the platform will be built on Corda Enterprise, the commercial version of R3’s open-source Corda Network.

Non-custodial exchange KyberSwap has announced a partnership with Coindirect to provide a fiat to crypto on-ramp. KyberSwap users can use credit and debit cards to purchase Ethereum, but will incur a 3.5% fee. KyberSwap says there will be no complex KYC for purchasing small amounts. The platform currently supports Ethereum and ERC-20 tokens.

Coinbase has launched a USDC Bootstrap Fund. The fund invests USDC directly into decentralised finance protocols. The USDC is tied up in a smart contract protocol and is available for borrow by any counterparty willing to provide crypto collateral and pay a floating interest rate. The first investment will be $1m USDC for Compound Finance and $1m USDC for dYdX protocol.

The EOS network is expected to undergo a hard fork on September 23rd at 13:00 UTC. This is the first consensus upgrade that requires a hard fork on the EOS network. Block producer ColinCrypto says “EOSIO 1.8 enables many positive features, such as the Voice social platform and a reduction of inflation from 5% to 1%. As such, this is a very important update.” According to block producer EOS Nation, 29 of the 30 top block producers have committed to upgrading.

Binance US To Launch Next Week

Binance US is planning to open registration and deposits next week on September 18th. After registration, six cryptocurrencies will be available for deposits including bitcoin, ethereum, XRP, bitcoin cash, litecoin, and tether. The new U.S. exchange will not offer services in New York due to the ‘BitLicense’ regulatory requirement. As of August, Binance had not yet applied for the license. The launch of Binance US comes after the exchange banned U.S. customers in June following regulatory uncertainty.

Binance is opening trading for its new stable coin BUSD starting September 16th. BUSD was created in partnership with the Paxos Trust Company, which already issues its own dollar-backed and gold-backed stablecoins. The new stablecoin has obtained regulatory approval from the New York Department of Financial Services (NYDFS).

Binance has already issued stablecoins pegged to bitcoin (BTCB) and the British pound (BGBP). BUSD will be backed by U.S. dollars on a 1:1 ratio

A report from U.S. News suggests early signs of cryptocurrency adoption in Cuba, as one of the first Cuban crypto exchanges Fusyona is becoming active. The U.S. trade embargo cuts Cubans off from many of the financial services available in the West and Cubans cannot obtain credit or debit cards for international use. Some Cubans have turned to cryptocurrencies to make online purchases and investments.

Jason Sanchez, a local Cuban who uses Bitcoin, to purchase parts from an online Chinese store told U.S. news “This is really opening new doors for us.” Fusyona currently has 1,300 users on the exchange.

Interstellar, the company behind the stellar blockchain is getting a new CEO. Current CEO Adam Ludwin is stepping down to work on Pogo, an app-focused company targeting interoperability between mobile wallets. Pogo will be structured as a subsidiary to Interstellar.

Zelle co-founder Mike Kennedy will be the new CEO starting September 15th. Zelle is the mobile payments network owned by several large U.S. banks including JPMorgan Chase, Citi and Bank of America. Kennedy, has been an advisor to the Stellar Development Foundation since 2017.

Ethereum co-founder Joseph Lubin is joining the governing board the Hyperledger project by the Linux Foundation. ConsenSys recently became a Hyperledger premier member, saying it will work on interoperability between blockchains and promote standards to support enterprise-grade blockchain environments.